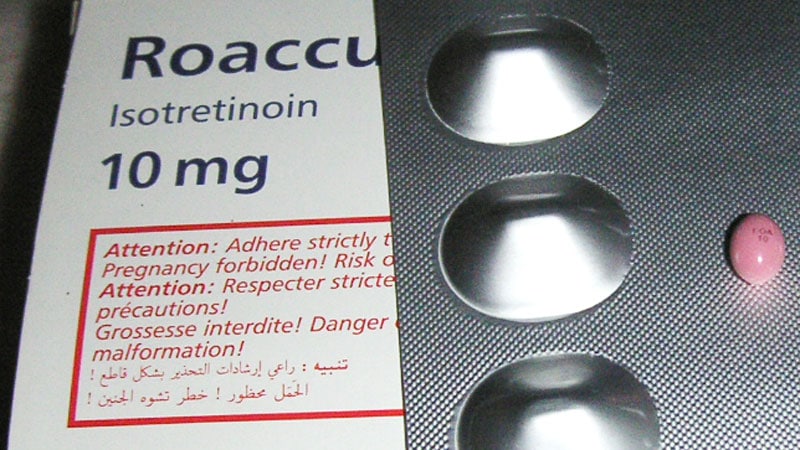 The use of isotretinoin to treat acne was not associated with an increase in adverse neuropsychiatric outcomes, compared with the use of oral antibiotics, in a large retrospective cohort study published in the British Journal of Dermatology.

Although severe neuropsychiatric effects associated with isotretinoin therapy in patients with acne have been reported, “the evidence base…is mixed and inconclusive,” and many studies are small, Seena Fazel, MBChB, MD, of the department of psychiatry, Oxford University, Oxford, UK, and co-authors write in the study.

The study results suggest that isotretinoin is conferring protection against adverse neuropsychiatric outcomes, particularly when compared with using oral antibiotics to treat acne, Fazel, professor of forensic psychiatry, at Oxford University, the study’s senior author said in an interview.

In the study, the investigators reviewed electronic health records (2013-2019) from a primarily US-based dataset (TriNetX) of patients with acne aged 12-27 who had been followed for up to 1 year after their prescriptions had been dispensed.

There were four arms: those prescribed isotretinoin (30,866), oral antibiotics (44,748), topical anti-acne treatments (108,367), and those who had not been prescribed any acne treatment (78,666). The primary outcomes were diagnoses of a neuropsychiatric disorder (psychotic, mood, anxiety, personality, behavioral, and sleep disorders; and non-fatal self-harm) within one year of being prescribed treatment.

Side effects of isotretinoin — such as headache, dry mouth, and fatigue — were higher among those on isotretinoin than in the other three groups.

The dermatology community has been interested in the impact isotretinoin has on mental health, and “I think clinically, they see that people get better on isotretinoin and their mental health improves,” Fazel told Medscape Medical News.

Asked to comment on the study results, John Barbieri, MD, MBA, director of the Advanced Acne Therapeutics Clinic, Brigham and Women’s Hospital, Boston, commended the investigators for the design of the trial.

“One of the strengths of this study is that they use a technique called propensity-score matching, where you try to make the groups of patients similar with respect to their other characteristics to minimize the risks of confounding and bias in the study, which I think is a real strength,” he told Medscape Medical News. “The other thing that they do, which I think is a strength, is to think about the impact of acne severity on these outcomes, because we know acne itself is associated with depression and risk for suicide and other neuropsychiatric outcomes.”

Including a cohort of patients who had acne and received oral antibiotics for comparison “is a nice way to address the potential for confounding by severity and confounding by indication,” Barbieri said. “Those who get antibiotics usually have more severe acne. They may not have it as severely as those who get isotretinoin, but it is a nice approach to account for background levels of depression and neuropsychiatric outcomes in patients with acne. I think that is a real strength of the study. This is one of the best studies to have looked at this question.”

However, although the study found isotretinoin decreased the excess psychiatric risk associated with refractory moderate-to-severe acne, it does not rule out the possibility that individuals may experience an adverse psychiatric outcome while on isotretinoin, Barbieri said.

“While I think on a population level, we absolutely can feel reassured by these data, I do think there are individual patients who have idiosyncratic, unpredictable reactions to isotretinoin where they have mood changes, whether it be irritability, depression, or other mood changes,” he cautioned. “Given the association of acne itself with mental health comorbidities, it is important to screen for comorbidities such as depression in all patients with acne.”

The study was funded by the Wellcome Trust, which provided Fazel and the first author with financial support for the study. One author is an employee of TriNetX LLC; the other authors had no relevant disclosures. Barbieri reported no financial disclosures. He is c o-chair of the AAD’s Acne Guidelines Workgroup and is associate editor at JAMA Dermatology .