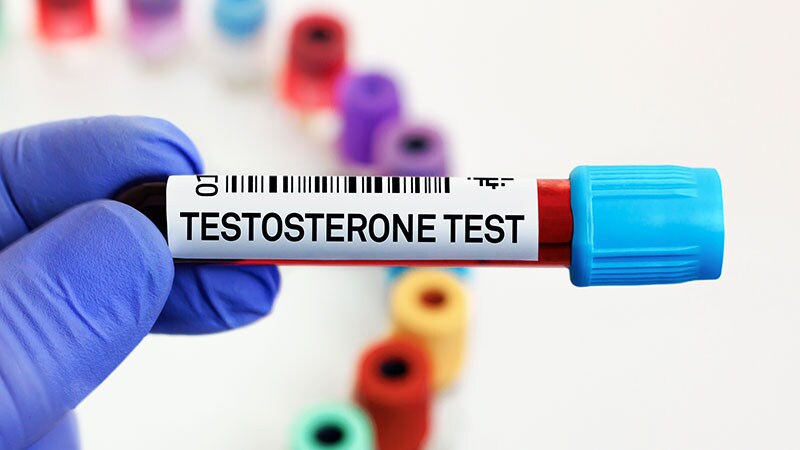 Normative ranges of testosterone in young men have been identified on the basis of a nationally representative data in a new study, and these data are expected to provide guidance when evaluating younger individuals presenting with signs and symptoms of potential testosterone deficiency, according to the investigators.

It has long been known that the ranges of normal testosterone differ by age, but the authors of this study contend that this is the first large-scale, population-based analysis conducted in the United States of testosterone levels among in men aged 20-44 years.

“These findings will provide valuable information that clinicians can use in the evaluation and management of young men presenting with concerns about testosterone deficiency,” reported a team of investigators led by Alex Zhu, MD, a urology resident at the University of Michigan, Ann Arbor, in the Journal of Urology.

Outside experts, however, disagree, one saying that the conclusions are “far off and irrational.”

A normative range of testosterone is particularly important for the evaluation of hypogonadism because values vary markedly between individuals and within individuals on repeat measurements over a 24-hour period. At least partially because of this variability, many guidelines, including those issued in by the Endocrine Society and the American Urological Association, recommend testosterone assays only in symptomatic individuals in order to reduce risk of detecting low relative levels that are not clinically relevant.

The data for this study were drawn from the National Health and Nutrition Examination Surveys (NHANES), which sample representative United States residents. The analytic cohort included 1,486 men stratified in 5-year age intervals (20-24, 25-29, 30-34, 35-39, and 40-44).

Because of the known diurnal variation in endocrine levels, only morning total testosterone levels were considered, for consistency. Individuals at risk of disturbed testosterone levels, such as those on hormonal therapy or with a history of testicular cancer, were excluded. Unlike previous analyses that have limited measurements to nonobese individuals without major comorbidities, no such restrictions were imposed in this analysis, which included a sample balanced by race.

After dividing the testosterone levels collected in the NHANES data by tertiles, the cutoff for reduced testosterone were defined as the lowest tertile for each of the five age groups studied.

Consistent with previous reports that testosterone levels decline with age, the cutoff for low testosterone declined for each increase in 5-year age interval after the age of 29 years.

As in the AUA guidelines, which define a total testosterone level below 300 ng/dL “as a reasonable cutoff in support of the diagnosis of low testosterone,” these cutoffs were established without correlation with symptoms. In younger men, like older men, testosterone levels must be within a clinical context.

“Per the AUA guidelines, clinician should consider measuring testosterone levels in patients with certain medical conditions or signs or symptoms of testosterone deficiency, such as depression, reduced motivation, infertility, reduced sex drive, and changes in erectile function,” Zhu said in an interview, adding that it is appropriate to follow the AUA guidelines “regardless of age.”

Hormone Levels and Symptoms Not Correlated

These recommendations are based on the fact that the correlation between symptomatic hypogonadism and testosterone levels is poor, meaning that other factors should be considered when considering whether symptoms relate to deficiency. However, Zhu contended that objective evidence of a low level of testosterone is useful in considering the role of hormone deficiency.

“Even if one were to choose a different cutoff, our age-specific normative testosterone ranges still provide young men and their physicians a framework for counseling,” according to Zhu. Because of the risk of nonspecific symptoms, such as fatigue and diminished physical performance, he called for “a high index of suspicion for testosterone deficiency even when evaluating younger men.”

Considering the diurnal fluctuations, the single measurement employed to calculate normative ranges is a limitation of this study, the authors acknowledged. They cited data suggested that up to 35% of men classified as hypogonadal on the basis of a single testosterone assay will not meet the same criterion even if evaluated in the subsequent 24 hours. It is for this reason that guidelines typically recommend measuring testosterone at least twice or with more than one type of assay.

Up until now, decisions about testosterone deficiency have been with a one-size-fits-all approach, but it has long been known that patient age is a variable in determining average levels of this hormone, Zhu reported. For this reason, he predicted that these data will have clinical utility.

“We believe that our new cutoffs play an important role in evaluating younger men presenting with symptoms [of testosterone deficiency],” Zhu said. “However, clinicians should still remember that these symptoms have causes other than low testosterone, so we cannot only focus only on testing testosterone.”

However, given the lack of correlation between symptoms and testosterone levels, this area remains controversial.

Two independent experts challenged the methodology and conclusions of this study.

“The authors propose unusually high cut-points for a definition of low testosterone in young men,” said Adlin, whose published a comment on age-related low testosterone in response to 2020 guidelines issued by the American College of Physicians. He is concerned that these data could lead to overtreatment.

The authors “imply that [these data] would justify treatment with testosterone in many young men with symptoms such as fatigue, depression, and lack of vigor, whose relation to low testosterone is controversial,” he said in an interview. “Trials in older men have failed to show a clear response of such symptoms to testosterone therapy.”

The first author of the 2018 Endocrine Society guidelines, Shalender Bhasin, MB, BS, director of a research program in aging and metabolism at the Brigham and Women’s Hospital in Boston, was even more skeptical.

“The whole premise of generating cutoffs for a disease or condition based on the middle tertile is just so far off and irrational,” he said. A coauthor of a 2017 study designed to define harmonized testosterone reference ranges by decade of age (that he described as providing “a much larger sample size and a wider age range” than this current study), Bhasin did not see any value in the NHANES-based analysis.

Rather, he called for an effort “to dispel this ill-conceived idea that could mislead young men to think they need testosterone treatment when they are healthy.”