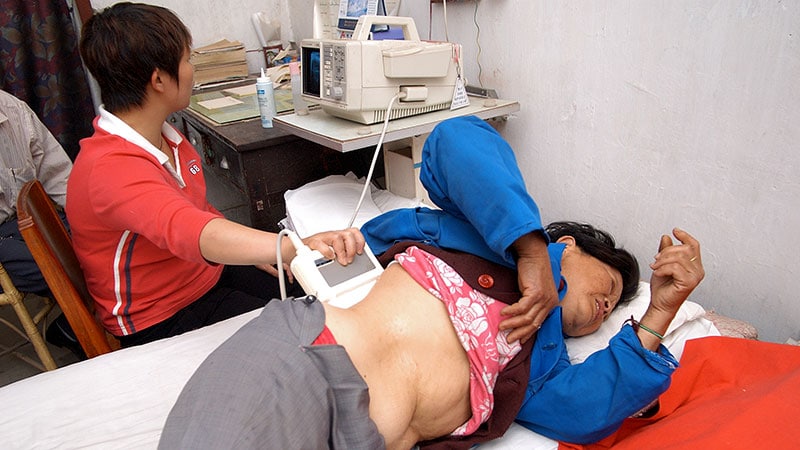 Treatment with transcutaneous, focused ultrasound safely led to the repositioning and rupture of a majority of stones in the urethra when tested in 29 people at two US centers in the first human feasibility study of the technology.

The results “support the efficacy and safety of using ultrasonic propulsion and burst wave lithotripsy [BWL] to reposition and break ureteral stones, potentially relieving pain and facilitating passage in awake patients,” write M. Kennedy Hall, MD, an emergency medicine physician at the University of Washington School of Medicine in Seattle, and co-authors in a report published in the November 2022 issue of The Journal of Urology.

“This is the first human trial in awake subjects” of this method for nonsurgically facilitating ureteral stone clearance, and the results of limited patient discomfort and stone motion in 66% of treated patients seem “almost too good to be true,” comments Karen L. Stern, MD, a urologist at the Mayo Clinic in Phoenix, Arizona, in an accompanying editorial.

However, Stern notes two study limitations. First, to correctly target the focused ultrasound clinicians first need to visualize a stone with ultrasound. However, “most urologists are not experienced in ultrasound,” a limitation that could mean the treatment may be more likely performed by emergency physicians or radiologists in the future.

Second, the study had no control patients, and Stern cautions that the clinical significance of BWL cannot be definitively assessed without a randomized trial that directly compares the new method with either spontaneous stone passage or medical expulsion therapy.

“The authors showed a distal urethral stone passage [rate] of 81%, but those stones passed within days, not minutes, of the procedure, and that rate is not too far off published data on spontaneous passage,” Stern notes in her editorial.

Despite these caveats, Stern calls the potential for BWL “immense.”

Ultrasound for 10 Minutes or Less

The study enrolled adults who presented to the University of Washington emergency department or endo-urology clinic with a proximal or distal ureteral stone. Twenty-nine awake, unanesthetized patients in whom clinicians had an unobstructed view of a stone in the focal zone received ultrasound treatment performed by trained personnel.

Treatment involved ultrasound bursts of up to 3 seconds for stone propulsion and 30 seconds at a time for BWL. Total ultrasound exposure could not exceed 10 minutes, and no patient underwent more than one treatment. Sixteen patients received treatment for propulsion only, and 13 received both propulsion and BWL treatments.

The primary outcome was stone motion, which occurred in 19 of the 29 patients (66%). A prespecified secondary outcome was passage of the stone in the 26 patients with distal stones. Among the 21 patients with at least 14 days of follow-up, passage occurred in 18 (86%) after an average of 3.9 days following treatment. The researchers also confirmed stone fragmentation in five of the 13 patients (38%) who received BWL treatment.

In an interview in 2021 with Medscape Medical News, Mathew D. Sorensen, MD, a study co-investigator, likened the effect of ultrasound on the stones to a leaf blower on garden debris.

“Essentially, we use the acoustic energy of ultrasound, which gets focused on the stone and creates movement, like a blower,” said Sorensen, a urologist at the University of Washington School of Medicine. “A push of energy lasts a second or two, sort of a sweeping movement to try to get fragments to move out of what’s usually the bottom of the kidney, toward the exit. Because the energy moves in one way, away from the probe, it’s sort of like playing pool,” he explained.

All 29 treated patients in the current study tolerated the procedure, and none experienced unanticipated events. No patients needed to visit the emergency department or an intervention because of the treatment, and there were no observed ureter injuries.

Assessment of pain scores by each patient before and after treatment showed overall significant decreases in both mean and median scores, with 10 patients reporting decreased pain and two reporting increased pain.

When discomfort occurred during the procedure it was described by patients as either similar to a pinprick or as a referred sensation to pass urine and the stone. These effects occurred during 18 of 820 (2%) total propulsive bursts of ultrasound administered.

“It’s nearly painless, and you can do it while the patient is awake, and without sedation, which is critical,” said Hall in a statement from the University of Washington School of Medicine. He envisions eventually performing the procedure in a clinic or emergency department setting.

The researchers acknowledge that a lack of a control group was a study limitation. They cite a historical, spontaneous stone passage rate of 54% included in a 2016 guideline from the American Urological Association and based on a meta-analysis of 27 studies with 1205 total patients.

The study was funded by the US National Aeronautics and Space Administration, which is interested in having a technology available to treat ureteral stones that may develop during prolonged space travel.

The study received no commercial funding. Four of the study’s 23 authors, including Sorensen, are consultants to and hold equity in SonoMotion, a company that has licensed the tested technology from the University of Washington for commercial development. The report did not identify a specific manufacturer of the ultrasound equipment used for treatment.