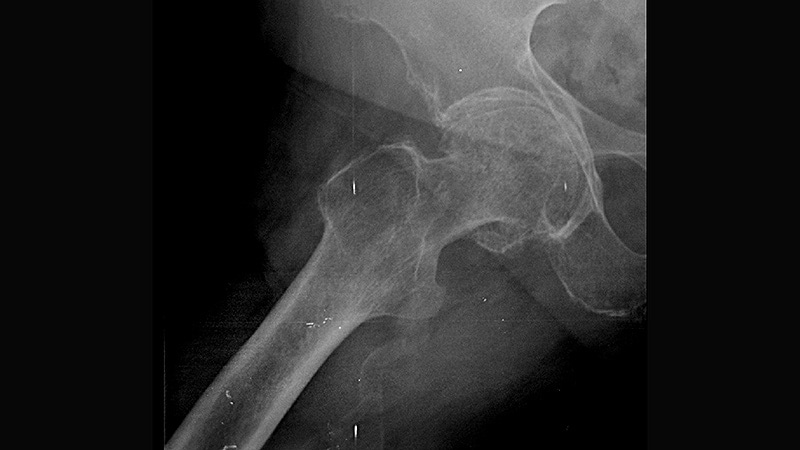 “Given the low radiation doses involved in DEXA, this could open up opportunities for ascertaining OA in larger population-based cohorts than those available for x-rays,” Ben G. Faber, MBBS, BSc, reported at the annual meeting of the British Society for Rheumatology during the best oral abstracts session.

This not only supports further research into OA but also means that it might be possible to use DEXA scans to help screen for hip OA and assess the risk for hip replacement in the future, added Faber, a Medical Research Council Clinical Research Fellow at the University of Bristol and rheumatology registrar for the North Bristol NHS Trust in England.

Session chair Tonia Vincent, MBBS, PhD, FRCP, a consultant rheumatologist and director of the Centre for Osteoarthritis Pathogenesis at the Kennedy Institute of Rheumatology at the University of Oxford (England), found the relationship between the DEXA findings and Kellgren and Lawrence (KL) grade and clinical outcomes to be “really striking.”

It highlights “a very important structure-symptom relationship, which people in the textbooks say doesn’t exist for osteoarthritis,” Vincent observed.

DEXA scans are a mainstay of assessing fracture risk in osteoporosis. Although originally developed for assessing bone mineral density, the newer scanners have such high resolution that they can now show radiographic features such as joint space narrowing (JSN) and the presence of osteophytes.

Both are given equal weighting in existing x-ray grading or scoring systems, which are fairly subjective, Faber said, but recent research conducted by him and his collaborators has suggested that the presence of osteophytes may be a better indicator of hip pain than JSN.

Using more than 40,000 DEXA scans obtained from the UK Biobank, Faber and associates developed a semi-automated tool that measured both JSN and osteophytes, giving greater weight to the latter. These patients with DEXA scans in the Biobank had a mean age of 63.7 years. Hip pain was present in 8.1%, hospital-diagnosed OA in 1.3%, and total hip replacement occurred in 0.6%.

Minimum JSN and osteophyte presence at each location was quantified using a scale of 0 (none) to 3 (greatest) to give a total score out of a possible 12; they then used this score to create five ‘grades’ from 0 (least) to 4 (most).

Applying these new radiographic hip OA grades to the Biobank DEXA scans revealed a strong and increasing association between the presences of osteophytes and the clinical outcomes considered.

For instance, when any osteophytes were detected, the odds ratios (ORs) for having hip pain for more than 3 months, a hospital diagnosis of OA, or THR were a respective 2.05, 4.98, and 6.17.

The presence of inferior or superior femoral osteophytes carried higher ORs for the three outcomes than did acetabular osteophytes, with the greatest ORs seen in patients with osteophytes at all three locations (6.95, 20.53, and 21.79, respectively). By comparison, ORs for JSN were 1.37, 3.48, and 3.91.

There were “strong progressive relationships between each grade of OA and the clinical outcomes,” Faber said, noting that “the headline figure” was that comparing people with grade 4 with grade 0, the risk for needing THR was 58 times higher. This tallies with what would be expected, Faber said, since “one would expect to see OA on imaging findings before someone had a total hip replacement.”

“One of the strengths of this study is that by using a semi-automated approach, we feel that this is a more objective measure of radiographic hip OA, which hopefully will mean that it’s more reproducible in the future when repeating in other cohorts,” Faber said.

Asked what he thought the future held, Faber responded: “A grand vision might be that you’re already doing DEXA scans to look at bone health in individuals, and from those same DEXAs you could get information on radiographic hip OA,” he hypothesized.

“We do this with BMD and we feed that into FRAX [Fracture Risk Assessment Tool] to give someone a fracture risk. Could we do the same for total hip replacement to really identify people are high risk of OA in the future?” he wondered. “Then could we intervene to potentially prevent that … or increase the duration that they’re healthy before they require the operation? There’s still plenty of work needed to get there.”

Faber and colleagues work was recently published in Rheumatology.

Faber had no conflicts of interest to disclose. Vincent had nothing to declare; her research is funded by Versus Arthritis, the Medical Research Council, the European Research Council, FOREUM (Foundation for Research in Rheumatology), the Dunhill Trust, and the Kennedy Trust for Rheumatology Research.