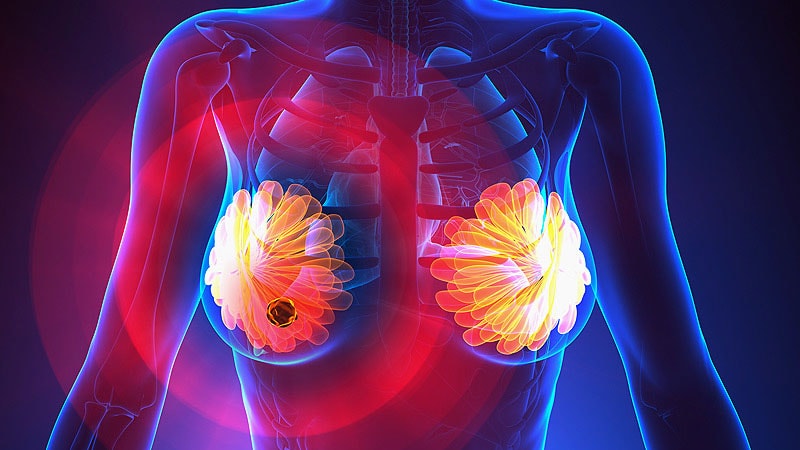 Women with breast cancer who are taking adjuvant endocrine therapy to reduce the risk for recurrence often report that the side effects of dampening down estrogen, such as hot flashes and vaginal dryness, spoil their quality of life, and these side effects can lead to discontinuation of therapy.

But medical measures to address these side effects carry risks, as shown in the results of a new study from Denmark.

The use of vaginal estrogen therapy (VET) increased the risk for breast cancer recurrence by 39% in women with early estrogen receptor–positive breast cancer who were taking aromatase inhibitors (AIs).

The finding was published recently in the Journal of the National Cancer Institute.

“Patients who are taking aromatase inhibitors should try alternative strategies for management of genitourinary symptoms because (VET) will likely increase their risk for breast cancer recurrence,” warn the authors of an accompanying editorial, Elizabeth J. Cathcart-Rake, MD, and Kathryn J. Ruddy, MD, oncologists at the Mayo Clinic in Rochester, Minnesota.

The use of oral estrogen treatment, known as menopausal hormone therapy (MHT), is also not recommended in breast cancer survivors being treated with AIs, the editorialists added.

The study did not find an increase in the risk for recurrence with MHT added onto AIs, but that finding comes from a very small subgroup of only 37 women.

“The absence of an obvious detrimental impact of MHT on breast cancer recurrence or mortality” in this study “is not particularly reassuring,” especially given higher systemic estrogen levels seen with MHT, Cathcart-Rake and Ruddy commented.

“Our study is, to our knowledge, the first to report a potential increased risk of recurrence in patients receiving AIs treated with VET,” say the investigators, led by Søren Cold, MD, an oncology researcher at Odense University Hospital, Denmark.

They suggest that women who are taking VET and AIs should be switched to tamoxifen after 2-3 years.

Speculating as to the apparent safety differences between the two endocrine therapies, Cold and colleagues explained that “AIs lower or nearly eliminate estrogen. As such, even a modest increase in circulating estrogens may” increase recurrence risk.

Tamoxifen, on the other hand, competes for estrogen receptor binding, so “a modest elevation of the very low serum estrogen levels” with hormone therapy “is not assumed to counteract the receptor blockade,” they said.

Study participants, obtained from a nationwide registry in Denmark, were diagnosed with early-stage, invasive, estrogen receptor–positive breast cancer from 1997 to 2004. Upfront treatment included surgery plus, in the majority of women, radiation.

The review identified 8461 such women. After initial treatment for breast cancer, 2410 went on to adjuvant endocrine therapy, including 2007 with tamoxifen, and 403 with an AI.

Across the entire study population, nearly 2000 women took VET and 133 women took MHT, as assessed by having redeemed at least two prescriptions. The hormone therapies were used in women who were both on and those who were not on endocrine therapy.

The investigators then analyzed the risk for recurrence in various subgroups.

The 39% higher risk for recurrence was found among the 822 women who used VET while taking an AI compared with 2520 women who received AIs alone.

Findings in the study were adjusted for numerous potential confounders, including age, tumor biology, and comorbidities.

Women were a median of 61 years of age (range, 35-91 years). Seventy-seven percent had invasive ductal carcinoma, and 43% were node-positive. Women on hormone therapy tended to be younger, have smaller tumors, and be less likely to have lymph node metastases.

The investigators excluded women who had taken hormone replacement before their breast cancer diagnosis.

The work was funded by the Danish Cancer Society. Cold reports no disclosures, but some co-authors reported relationships with Samsung, Novartis, Pfizer, and other companies. Cathcart-Rake and Ruddy report no disclosures.

M. Alexander Otto is a physician assistant with a master’s degree in medical science and a journalism degree from Newhouse. He is an award-winning medical journalist who worked for several major news outlets before joining Medscape and is also an MIT Knight Science Journalism fellow. Email: aotto@mdedge.com