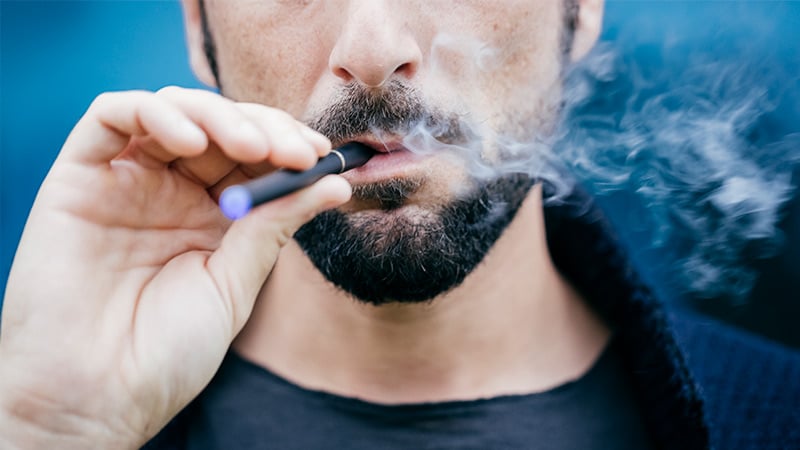 People who vape have lower levels of exposure to a tobacco-related carcinogen than cigarette smokers, according to a new study of urinary biomarkers.

Lower concentrations of a carcinogen metabolite in urine suggest that “switching completely from combustible cigarettes to e-cigarettes may provide significant health benefits,” said Hongying Daisy Dai, PhD, professor and associate dean of research in the College of Public Health at the University of Nebraska Medical Center in Omaha, who is the corresponding author of the study.

Vapers’ exposure to nicotine substantially increased from 2013 to 2019, consistent with the proliferation of vaping products that contain high levels of the drug, the researchers report.

To examine how urinary biomarkers of exposure to tobacco-related toxicants changed from 2013 to 2019 among adults who used nicotine e-cigarettes, e-cigarettes without nicotine, or combustible cigarettes, Dai and her co-authors analyzed data from the Population Assessment of Tobacco and Health, a nationally representative study.

Their analysis, published online November 8 in JAMA, included data from 16,393 smokers, 1240 nicotine vapers, and 197 vapers who used e-cigarettes without nicotine.

Compared with nonnicotine vapers, nicotine vapers were more likely to vape daily and to report a higher number of puffs in the 3 previous days (median, 14.8 puffs vs 2.6 puffs).

Furthermore, nicotine metabolites ― the substances produced when the body breaks down the drug ― in nicotine vapers nearly doubled over a 6-year period. Still, their levels of exposure to nicotine remained generally lower than those for tobacco smokers, although the difference between the groups shrank over time, according to the researchers.

Levels of NNAL (4-[methylnitrosamino]-1-[3-pyridyl]- 1-butanol), a metabolite of a tobacco-related carcinogen, were consistently lower in vapers than smokers. Levels of NNAL did not significantly change over time in the three groups, the researchers report.

“The lower NNAL level in both nicotine and nonnicotine vapers vs smokers suggests that e-cigarettes might represent a reduced health risk than cigarette smoking,” Dai told Medscape Medical News.

“Regardless of how vaping products have evolved, NNAL carcinogen exposure remained low” in people who vaped and didn’t smoke, the researchers write.

Some experts have said that it is too early to assess the long-term harms of e-cigarettes, and research indicates that they can exacerbate nicotine dependence.

The study was supported by the National Institute on Drug Abuse and the National Cancer Institute. The researchers have disclosed no relevant financial relationships.