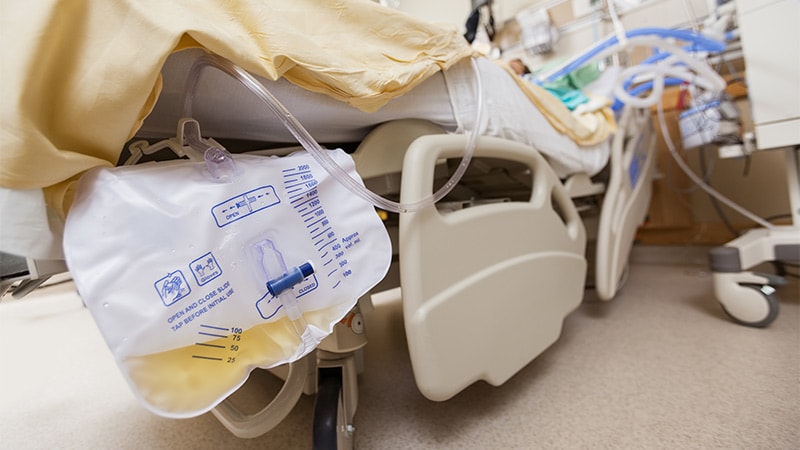 Those who received intravenous (IV) acetazolamide, compared with placebo, on top of a usual-care IV loop diuretic in the multicenter study were 46% more likely to achieve “successful” decongestion — that is, to leave the hospital without lingering signs of volume overload.

The trial, with more than 500 patients, is the first “to unequivocally show benefit of any drug, namely acetazolamide, on major heart failure outcomes in patients with acute decompensated heart failure,” said Wilfried Mullens, MD, PhD, Hospital Oost-Limburg, Genk, Belgium, at a media briefing during European Society of Cardiology (ESC) Congress 2022 in Barcelona, Spain.

The patients who received acetazolamide “also had a shorter hospital stay, having a major impact on not only quality of life, but also healthcare expenditures,” said Mullens, who leads the steering committee of the trial conducted in Belgium. He presented the results of Acetazolamide in Decompensated Heart Failure with Volume Overload (ADVOR) today at ESC 2022 and is lead author on its same-day publication in the New England Journal of Medicine.

Current guidelines on managing volume-overloaded patients with ADHF owe a lot to the 2011 DOSE trial, which provided some of the first randomized-trial evidence in an arena led largely by clinical tradition. The advantages it saw with the high-dose furosemide strategy helped it enter into clinical practice, but even in DOSE the strategy fell short of achieving full decongestion for many patients.

The ADVOR report describes acetazolamide as a carbonic anhydrase inhibitor that reduces sodium recovery in the proximal tubule, similar to the function of loop diuretics in the loop of Henle. Acting in different segments of the nephron, acetazolamide and loop diuretics like furosemide may potentially have complementary effects that improve diuretic “efficiency.”

The difference in decongestion effect between the acetazolamide and placebo groups grew consistently from baseline to day 3. “There was an increase in treatment effect over consecutive days,” Mullens said. “This highlights the importance of treating congestion both early and aggressively. You cannot catch up,” he said. “If you don’t treat them aggressively initially, you can never get them dry.”

Although the trial wasn’t powered for clinical outcomes, the 3-month rates of death from any cause or rehospitalization for heart failure were similar at 29.7% in the acetazolamide group and 27.8% for the control group. All-cause mortality in an exploratory analysis was also statistically comparable at 15.2% and 12%, respectively.

The study is noteworthy “because it tests a readily available diuretic, acetazolamide, that is not used widely for ADHF,” and showed a benefit at 3 days from adding the drug to a prescribed loop diuretic regimen, Mark H. Drazner, MD, University of Texas Southwestern Medical Center, Dallas, told theheart.org | Medscape Cardiology.

The benefit didn’t translate into improved clinical outcomes; indeed, mortality at 3 months was numerically higher in the acetazolamide group, observed Drazner, who is unaffiliated with the study.

Although ADVOR isn’t powered for mortality, he acknowledged, “one would expect the enhanced decongestion would have led to improved outcomes,” or at least a signal of such improvement.

It’s worth noting, Drazner added, “that the strategy tested was to add acetazolamide up front, on day 1, before loop diuretics were maximized.”

Indeed, the published report says all patients received IV loop diuretics at double the oral maintenance dose, given the first day in a single bolus immediately on randomization. The dose was split into two doses, given at least 6 hours apart, on day 2 and on day 3. “The bolus of acetazolamide or matching placebo was administered simultaneously with the first dose of loop diuretics each day,” it states.

Although the protocol called for one loop diuretic dose on day 1, typically in practice patients would be dosed twice or 3 times each day, Drazner observed. Once-daily IV diuretic dosing may be less effective than a 2- or 3- times-per-day schedule, he said. As a result, acetazolamide might achieve faster decongestion after it is added to the loop diuretic, a benefit that would not otherwise be available in practice.

Before this trial, Drazner said, he would usually add the thiazide diuretic metolazone as needed “to augment diuresis beyond maximum loop diuretics.” After ADVOR, “I’d be willing to try acetazolamide in that setting, recognizing I also don’t know the impact of metolazone on outcomes.”

Still, he would restrict either drug to patients who fail on maximal loop diuretics, “rather than adding it routinely and up front, before the loop diuretics are maximized.”

More data are needed, Drazner said, including from a larger clinical-outcomes trial to confirm the strategy’s safety, before “the up-front addition of acetazolamide to submaximal loop diuretics doses” could become part of standard practice in ADHF.

Given the data so far, including those from ADVOR, “treatment with loop diuretics alone is probably sufficient for successful decongestion” among patients likely to respond to the drugs, that is, “those who are younger, those who have less severe or new-onset heart failure, and those who have normal kidney function,” states an editorial accompanying the published report.

“However, for the large group of patients who have some degree of diuretic resistance, or for those who have an inadequate initial response to loop-diuretic therapy, these data suggest the use of acetazolamide as a reasonable adjunct to achieving more rapid decongestion,” writes G. Michael Felker, MD, Duke University School of Medicine, Durham, North Carolina.  Felker was lead author on the DOSE primary publication in 2011.

ADVOR entered volume-overloaded patients with ADHF and elevated natriuretic peptide levels who had been on oral maintenance with at least 40 mg of furosemide, or equivalent doses of other loop diuretics, for at least a month before randomization.

The Role of SGLT2 Inhibitors

ADVOR, understandably but maybe problematically, excluded patients taking SGLT2 inhibitors. The drugs have diuretic effects, among other useful properties, and became core therapy for a range of heart failure types after the trial was designed.

“This exclusion presents a conundrum for applying these results in contemporary clinical care,” Felker writes. For example, “the data supporting the efficacy and safety of SGLT2 inhibitors across the broad spectrum of patients with heart failure are now overwhelming, and most patients who are hospitalized for heart failure have a clear indication for these agents.”

Given that no ADVOR patients were on the drugs, his editorial states, “we can only speculate as to the efficacy of acetazolamide in patients treated with background SGLT2 inhibitors, which could potentially be additive, subadditive, or synergistic.”

The SGLT2 inhibitors will likely “be used in ADHF in the future, based on studies such as EMPULSE. It will be important to know whether SGLT2 inhibitors change the risk-benefit of also giving acetazolamide,” Drazner said when interviewed.

“I don’t think there’s any safety issue with regards to the combination of SGLT2 inhibitors and acetazolamide,” Mullens said. Their diuretic effects are likely to be additive, he proposed.

“Although SGLT2 inhibitors and acetazolamide both exert natriuretic and diuretic effects on the proximal tubules, their mode of action and potency differ substantially,” the published report states.