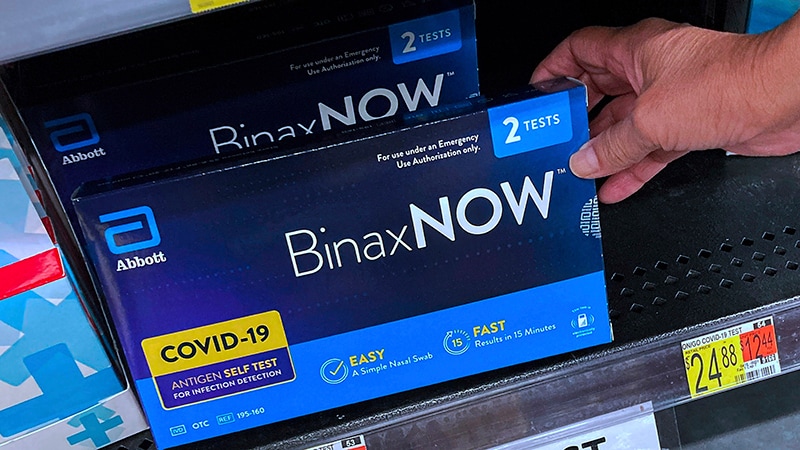 Walmart and Kroger raised the price of one of the most popular and least expensive at-home COVID-19 test kits after an agreement with the White House to sell the tests at a lower cost expired.

Abbott’s BinaxNOW kit, which was one of the first at-home test kits to be authorized by the FDA in December 2020, was sold at a reduced price under a 3-month agreement. But on Wednesday, the kit was listed on Walmart’s website for $19.88, up from $14 in December. Kroger has listed the test kit for $23.99, according to NBC News.

In September, President Joe Biden announced an agreement with Amazon, Kroger, and Walmart to sell the tests “at cost” to ramp up testing for the Delta variant. The agreement expired in mid-December as the Omicron variant began driving up case numbers across the country.

Walmart sold the test kits for $14 through the holidays before increasing prices, a spokeswoman told NBC News.

“We have seen significant demand for at home COVID-19 testing kits and are working closely with our suppliers to meet this demand and get the needed product to our customers,” she said in a statement.

The spokeswoman noted that inventory remained stronger in stores than online. The Abbott kits, which include two tests per box, were listed as sold out on the Amazon, Kroger, and Walmart websites on Wednesday morning. Amazon’s listing doesn’t indicate the price or if the test kit will be back in stock.

The three companies have other test kits listed online, including several that were sold out on Wednesday and a couple that were available for shipping. Some kits may take more than a week to arrive, the websites indicated.

In a statement, Kroger told NBC News that it had fulfilled its commitment to the Biden administration’s agreement and had reinstated retail pricing. Meanwhile, an Amazon spokeswoman said the company developed its own FDA-approved PCR test, which sells for $39.99 and is processed in an in-house laboratory, according to The Wall Street Journal.

CVS and Walgreens have been selling the Abbott test kits for $23.99, the newspaper reported. Most retailers are limiting the number of tests that customers can buy. All of the COVID-19 test kits listed on the CVS and Walgreens websites were sold out on Wednesday.

Biden announced last month that his administration would ship 500 million free test kits to people who request them. Administration officials have said they expect the first batch to ship this month, though the website to request kits hasn’t yet been opened.

To meet the demand, Abbott Laboratories told the Journal that its plants are running around the clock to produce 70 million tests per month.