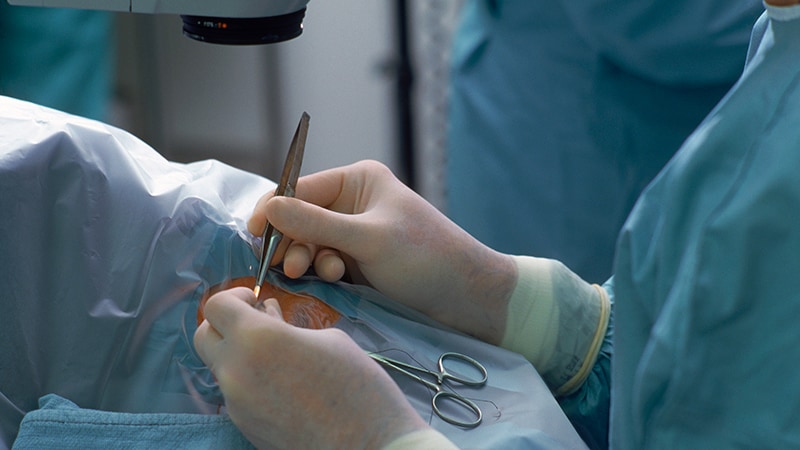 In ophthalmology, there are several approved, biotechnologically manufactured, regenerative medicine products that are used as eye drops or as transplants for corneal diseases. Gerd Geerling, MD, PhD, professor of ophthalmology at University Hospital Düsseldorf, Germany, and president of the German Ophthalmological Society (DOG), presented the methods, indications, and therapeutic options at a press conference ahead of this year’s DOG congress.

Corneal damage can be the result of many diseases and injuries and, in extreme cases, can lead to corneal blindness, said Geerling. Examples of this are herpes infection, diabetes, or central-nervous neurodegenerative diseases, which lead, for example, to neurotrophic keratopathy, a corneal disease caused by degeneration of the corneal nerves.

Severe injuries (eg, through burning) and inflammations, such as with Sjögren syndrome, Stevens-Johnson syndrome, or ocular cicatricial pemphigoid, may result in a limbal stem cell deficiency. The corneal limbus, the transition zone between cornea and sclera, contains stem cells and is responsible for regular cell regeneration in the corneal epithelium.

“These corneal damages,” said Geerling, “just like with the relatively common keratoconus, a progressive, dome-shaped deformation of the cornea, are potential areas of application for regenerative therapeutic agents. This is why neurotrophic growth factors, acellular tissue matrices, or stem cells are now being used alone, or in combination, for ocular regeneration.”

A product based on recombinant human nerve growth factor (rhNGF) has been approved in Europe for the treatment of neurotrophic keratitis and is easy to apply in the form of eye drops. Cenegermin, the active substance, helps to restore some of the normal healing processes in the eye and to repair damage on the eye’s surface sustained in connection with the disease.

“The approval studies demonstrated that after 8 weeks of therapy, complete epithelial closure was achieved in 72% of patients, compared with just 33% in the control patients,” said Geerling. The European Medicines Agency (EMA) approved the product based on the evidence that it increased the number of patients who achieved complete healing of the eye’s surface by around 30% to 40%, compared with eye drops without the active substance.

The product can only be obtained from outside Europe, however, and at a costly five-figure price per treatment. New neuromimetic molecules are being tested in phase 3 studies as potential alternatives to expand the therapeutic options for neurotrophic keratopathy.

Porcine corneal tissue, which is available in large amounts as a waste product from slaughterhouses, is made cell-free using approved processes to avoid rejection reactions in humans and enable inflammation-free healing in the recipient’s eye. “By using a microkeratome, this cell-free, porcine corneal tissue can be trimmed to make a replacement stroma and then be implanted into a pocket of human corneal tissue with the help of lasers,” said Geerling.

This corrects the keratoconus-related thinning and deformation, as well as the corneal distortion. A corresponding implant is approved in Germany but still requires careful clinical testing.

Therapy with cell-populated artificial tissue may be considered if there has been a loss of natural epithelial regeneration in the corneal limbus, such as after a burn on the eye’s surface. “Here, cultivated autologous limbus epithelial cells can be transplanted on an acellular carrier with the aim of regenerating the corneal surface,” said Geerling. The required cells are taken from the healthy eye and expanded in the laboratory on an amniotic membrane or fibrin gel.

“By using the few square centimeters of tissue construct (Holoclar) manufactured in this way in the lab, the cell regeneration zone in the healthy eye can be multiplied, so to speak, and then transplanted into the diseased eye as a replacement,” said Geerling.

The overall success rate (defined as complete, avascular closure of the corneal surface) determined in studies of the EU-approved therapeutic procedure was about 70%, and the costs reportedly exceed 100,000 euros (US $100,000) per treatment.

If both eyes are damaged in the same manner, stem cells from other regions of the body (eg, from hair follicles, the oral mucosa, or mesenchymal stem cells) must be used. This technique is already being used in clinical applications but is not yet commercially available.

Claus Cursiefen, MD, PhD, professor of ophthalmology at the University Hospital of Cologne and general secretary of DOG, gave a report at the DOG press conference about the situation regarding corneal transplants in Germany and worldwide. With an annual total of more than 9000 procedures in Germany, and around 40,000 across Europe, corneal transplants are the most common transplant in medicine.

While there is a well-functioning system of cornea banks in Germany and, according to Cursiefen, there is only a “relative” lack of donors in Germany and Europe, the scale of the shortfall in developing countries is dramatic. It is calculated that in these countries, there is one donor for approximately 70 potential recipients.

The following potential strategies could help to mitigate the lack of donors:

As an example of biocorneas, Cursiefen referred to a technique in which a transparent and stable transplant product is generated using modified scales from the tilapia fish, and this product is then used as a matrix and successively taken over by the recipient.

According to Cursiefen, the fish-scale transplant is currently an interesting approach to treating ocular injuries, but it is certainly not the overall solution to the lack of transplant tissue.

This article was translated from the Medscape German edition.