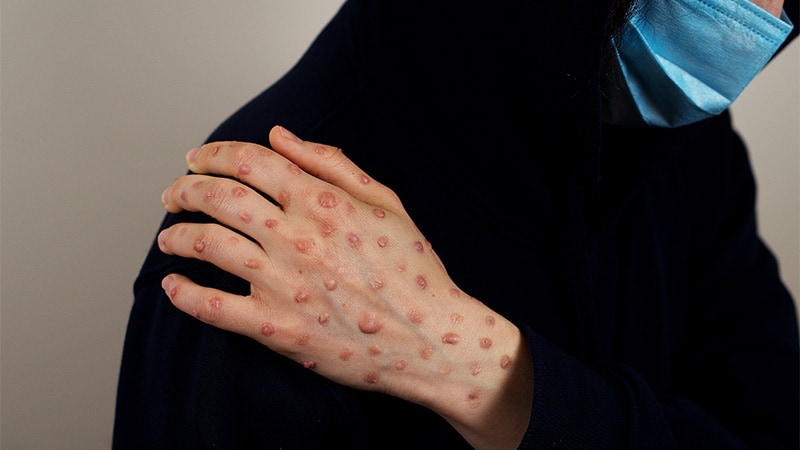 PARIS — France is boosting its vaccination campaign in response to the increase in cases of monkeypox. After a sluggish start, newly appointed French health minister François Braun has announced the release of 42,000 vaccine doses. At the same time, medical students will be able to lend a helping hand at vaccination sites. However, some experts have criticized the measures taken as being too lax to combat what the World Health Organization (WHO) has designated a global health emergency.

For Benjamin Davido, MD, MSc, PhD, an infectious disease specialist at the Raymond-Poincaré Hospital (Paris Public Hospital Trust, AP-HP, Garches region), the risks of this disease have been minimized and the measures taken are not adequate, despite the ready availability of the tools needed to manage the epidemic. We must remain alert to the risks posed by this monkeypox epidemic, which seems different from the sporadic outbreaks that usually crop up in Central and West Africa, he said. Davido recently shared his opinions in an interview with Medscape.

Medscape French Edition: What do you think about the monkeypox vaccination campaign currently underway in France?

Davido: It doesn’t go far enough, and I am surprised by the lack of a concrete and specific objective. The effects of the disease are being minimized, and we seem to be in limbo. It seems we have to wait until the fire is out of control before we can call the fire department. We should have been more reactive and taken a more drastic approach from the get-go. In France, as in other countries affected by this epidemic, we are still, unfortunately, in a phase of observation, reassuring ourselves that this will surely not become another pandemic, as that would be really bad luck.

Yet we find ourselves in an unprecedented situation: we have known about the disease in question for a long time, the target population has been identified and we have a vaccine immediately available. So, we have all the tools and knowledge acquired from the COVID-19 pandemic at our disposal, yet we are choosing to wait and see. We have clearly underestimated the risks of failing after a stalled start to the vaccination campaign.

Medscape: What exactly are the risks, in your opinion?  Should we already be worried about how the epidemic is progressing?

Davido: The situation is definitely worrying. I personally am convinced that this disease will be the syphilis of the 21st century. Although the risk is low, it is not beyond the bounds of possibility that this could be the start of a new pandemic. For the time being, its spread is limited to at-risk populations, mainly men who have sex with other men and who have multiple partners, which accounts for around 300,000 people in France. However, the risk for heterosexuals must not be minimized; we must not forget that this disease can also be transmitted through contact with an infected person and by respiratory droplets from people living in the same household. There have been recent cases of women and children infected with monkeypox. If monkeypox starts to spread in the community, rather than being a sexually transmitted infection, the epidemic could spread to the rest of the population. With the rise in cases, scientists are also concerned about transmission to animals. Monkeypox could become endemic like it is in Africa, where rodents are the main reservoir of the virus.

Medscape: What do we know about the dynamics of this epidemic?  What can be done to effectively improve the situation?

Davido: Experience gained from African countries affected by monkeypox, as well as from the spate of cases that occurred in the United States in 2003, has shown us that the epidemic can be controlled once the cases have been contained. It is hoped that further waves of the epidemic can be avoided, providing the monkeypox vaccine achieves its objectives.

But we need to give ourselves the means to do so. The expansion of the vaccination program to the most at-risk populations in early July was the right decision. We have seen that ring vaccination targeting close-contact cases does not work with monkeypox. The current problem is that this vaccine is nearly exclusively restricted to hospital settings. We are making the same mistakes as [we did] at the start of the COVID-19 epidemic. We don’t have the right infrastructure in place for this vaccination program. We need to get doctors, paramedics, pharmacists, etc. involved. And cut back on the red tape. After embracing digital procedures during COVID-19, we find ourselves having to complete paper copies of documents for every single person attending a vaccination site. It just doesn’t make sense!

Medscape: You highlighted the lack of a clear objective with this vaccination campaign. What should we be aiming for?

Davido: During the COVID-19 vaccination campaign, there was a set number of people to be vaccinated within a given timeframe. The approach demanded a fast pace and a desired outcome. Yes, it was an ambitious target from the get-go, but it was one that we stuck to. Currently, no figure, no target, has been set for the monkeypox vaccination program. Ideally, we would have completed the vaccination campaign before the start of the new school year to limit new infections.

As it stands now, only 10% of the target population has received the vaccine. There is talk of the summer period not being favorable. Yet I remember that last year, the COVID-19 vaccination program was strengthened in the middle of August. If the monkeypox vaccination campaign is not given a boost by the end of the summer, we run the risk of encouraging transmission of the virus between close contacts when different groups mix after being on holiday at the start of the new school year. I think that, first and foremost, we must make general practitioners aware of the disease and train them in how to diagnose it so that patients can be isolated and vaccinated as quickly as possible.

Medscape: There has also been talk of increasing the set 28-day period between the two doses, or even getting rid of it entirely. Would this perhaps lead to better vaccine uptake?

Davido: The United Kingdom has chosen to give a single dose and recommends a second dose after exposure. I am not sure that this is the best strategy. Although the efficacy data are still limited, the results are not as good after a single dose. According to initial data from the French National Agency for the Safety of Medicines and Health Products (the ANSM), the rate of seroconversion after one dose rises from 10% to 56% on D28 in healthy volunteers, but is between 77% and 89% two weeks after the second dose administered on D28.

So, the second dose is needed, especially as immunological memory seems to drop 2 years after the first injection. The US Centers for Disease Control and Prevention (CDC) propose leaving 35 days between the two doses. I think this is a reasonable timeframe. So, delaying the second dose makes administration of the first dose even easier because the second often fell in the middle of the holiday period and so we also save precious doses. If the time between doses is longer, we risk vaccinated individuals becoming lax and possibly being tempted to skip the “optional” booster or simply forgetting about it.

Medscape: Are people who have already had the smallpox vaccine better protected against monkeypox?

Davido: The efficacy of this vaccine against monkeypox is not perfect on a very long-term basis and, to be honest, we don’t really know the level of protection afforded by first-generation vaccines after 20 years. We must not forget that 20% of people infected with monkeypox were vaccinated against smallpox before mandatory vaccination for this disease was abolished [Editor’s note: The requirement of an initial dose of smallpox vaccine was lifted in 1979, once smallpox had been eradicated].

It is hoped that, as a minimum, this vaccine protects against serious illness. Yet in my department, we regularly see severe cases of monkeypox with widespread lesions in the over 45s, who are said to be vaccinated against smallpox.

Medscape: By comparison, is it likely that a third-generation vaccine would afford better protection against severe illness?

Davido: We still don’t have enough data or hindsight to assess the real-world impact of third-generation vaccines. This vaccine has a better tolerance profile than its predecessors, but we currently don’t know if it protects against severe forms of monkeypox. We also need to learn more about the disease causing the current epidemic, since it seems different from the sporadic outbreaks that usually crop up in Central and West Africa. The lesions seen are notably milder. The WHO has given this vaccine an efficacy level of 85% against infection by the monkeypox virus, but we must remain cautious: this figure is based on data from Africa. The epidemic in which we find currently find ourselves is not the same. Overall, we must be wary of overly optimistic rhetoric around this new epidemic.