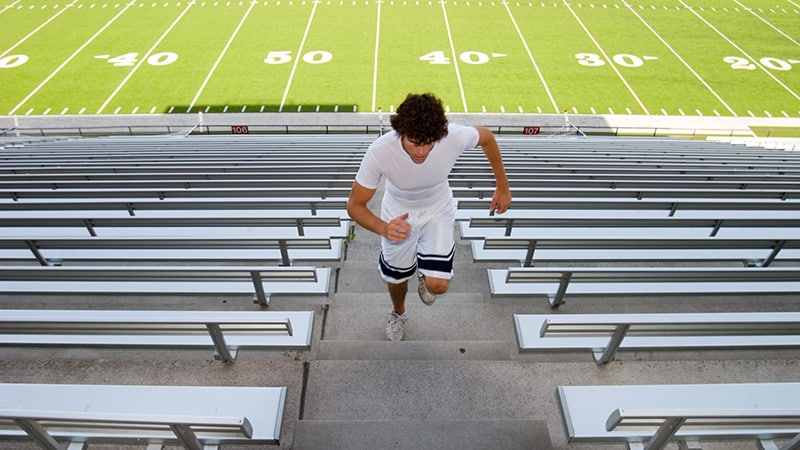 The prevalence of exercise-induced arrhythmias in young athletes with fragmented QRS (fQRS) patterns in lead V1 was 27%, similar to that seen in adult athletes, based on data from nearly 700 individuals.

Recent data suggest that fQRS complex in lead V1 (fQRSV1) in healthy athletes may promote arrhythmias in the context of training-induced right ventricular remodeling, but the prevalence and significance in young athletes has not been well studied, Guilia Quinto, MD, of the University of Padova (Italy) said in a presentation at the annual congress of the European Association of Preventive Cardiology.

The overall prevalence of fQRSV1 was 27%. Individuals with fQRSV1 were significantly less likely than those without fQRSV1 to be female (22% vs. 43%), and to present with a lower resting heart rate (66.98 beats per minute vs. 70.08 beats per minute).

Notably, right ventricular end-diastolic diameter was 20.42 mm/m2 among individuals with fQRSV1 and 19.81 mm/m2 in those without, a significant difference (P = .019), Quinto said. Tricuspid annulus plain systolic excursion also differed significantly; 24.33 mm and 23.75 mm for individuals with and without fQRSV1, respectively (P = .013).

However, the individuals with fQRSV1 showed no increased occurrence of any type of exercise-induced arrhythmias regardless of morphology or complexity, said Quinto.

The prevalence of common and uncommon arrhythmias among individuals with and without fQRSV1 was 31% versus 34% and 13% versus 11%, respectively; these differences were not significant.

The study findings were limited by the relatively small size, but were strengthened by the review of echocardiographic data by two independent physicians, she said.

The results show that the overall prevalence of fQRSV1 in young athletes is comparable with patterns seen in studies of adult athletes, and no differences in exercise-induced arrhythmias occurred despite differences in right ventricular characteristics, she concluded.

The ECG pattern identified in the current study is often encountered in the evaluation of athletes, but its importance was unknown, Matthew Martinez, MD, a sports cardiologist at the Atlantic Health System in Morristown, N.J., said in an interview.

“Studies of ECG findings in athletes continues to inform us about which findings are important to evaluate. This study furthers our understanding of how to proceed,” and will serve as a guide for additional testing to reduce athlete risk, he said.

Looking ahead, “this study should guide clinicians about additional testing and evaluation when fQRS is present in adolescent athletes compared to adults,” Martinez noted. However, additional research is needed to determine which is the next best test, and whether the patient requires ongoing surveillance, or whether a single evaluation is sufficient, he said. “Further study should focus on best practices after fQRS is identified and whether outcomes can be linked to this finding.”

The study received no outside funding. Quinto and Martinez had no financial conflicts to disclose.